Congrats, this is the week you’ve ovulated and consequently made history!

But you are still in the early stages of pregnancy, hence may not be able to actually feel the third week pregnancy symptoms. When you’re three weeks pregnant, the soon to be fetus will be transformed from a cell to a baby boy or girl.

Furthermore, the sperm that takes home the gold will then pave its way to the egg’s outer layer, after which the zygote or the single cell fertilized egg will form a barrier to block any other sperm from entering.

But take note that the single cell or zygote won’t stay single for long, but within a few hours will divide two, four cells and so on until it reaches approximately 100 cells in a few days after the initial mating of sperm and egg.

Just like your week 1 and week 2, the symptoms of week three pregnancy may not be clear yet. This is mostly because pregnancy hormones are what cause pregnancy symptoms, which at this stage you do not have a whole bunch of, but you will soon get there.

Detecting pregnancy symptoms when you’re three weeks pregnant can be tricky, and are similar to those you generally experience right before your period begins.

But here are a few common symptoms that you may experience when you’re three weeks pregnant.

At this stage of pregnancy, the hormone hCG(human chorionic gonadotropin) will begin to make its way through your body, and owing to this may cause feelings of nausea or queasiness.

This feeling may get worse so much so that it provokes you to puke and sometimes is regarded as morning sickness.

If you do feel like puking, you’re probably much further ahead in your pregnancy than three weeks or you may be three weeks pregnant with twins. Reason being that going to be twin moms generally have a surge in pregnancy hormones that can cause worse nausea.

If you’re going to be embryo has already found its way to his or her new home, you may notice a tiny bit of spotting as the fertilized egg integrates with the wall of your uterus.

You may notice sore breasts and darkening nipples owing to the fact that your body is now preparing to make milk.

If your period cycle is generally less than 28 days, you may realize that you may be pregnant at the end of week three. The only way to be a 100 percent sure is by taking a pregnancy test.

Your doctor in some cases may ask that you take a blood test in order to determine if you’re at the risk of ectopic pregnancy or miscarriage.

Blood tests have the ability to detect smaller amounts of hCG compared to urine tests, so taking one of these can help you find out sooner that you’re indeed pregnant than traditional pregnancy-at-home test.

The first thing you should do when you buy a home pregnancy test is to check the box to see how accurate the results are. Most are over an impressive 99 percent accurate once you miss your period, and some go the extra mile by detecting your pregnancy hormones much sooner than that.

Scents may feel stronger when you’re three weeks pregnant due the hormone estrogen’s ability to magnify every little fragrance-good, bad and ugly.

Baby’s Development inside your Belly in Week 3

At three weeks pregnant, you’re probably excited to notice something about your appearance, but you probably won’t show until you’re around week 12.

Before you start opting for meal servings for two, remember that OB’s highly recommended most women only gain a total of five pounds in their first trimester, which equates to the first 13 weeks.

At this stage, you should not do or try anything different, but rather still focus on eating healthy, take your prenatal vitamin along with a doctor recommended dose of folic acid. 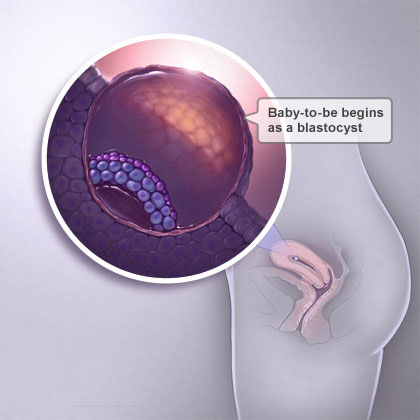 A day after you’ve conceived, your baby is currently a cluster of cells, which will gradually being to travel from the point of fertilization in the fallopian tube to its final destination in the uterus.

At three weeks pregnancy, your baby depends heavily on the trove of nutrients stored within the egg to develop and survive. The egg will be implanted into your uterus in the next few days, after which the placenta will begin to take shape.

Your fertilized egg in week 3 of pregnancy is travelling through a fallopian tube, and in the process is dividing constantly into identical cells until it reaches your uterus.

This tiny fertilized egg (marula) in your third week of pregnancy may not be detected yet in an ultrasound because it no bigger than a grain of salt. However, your OB may notice your uterine lining expand at the onset of week four—a sign that the marula has arrived at his her destination (your uterus) and will be nurtured there for the nine or so months. 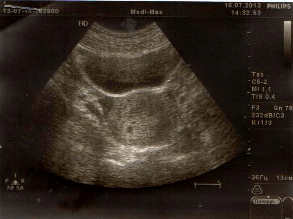 
Calculate your due date using a reputable due date calculator.
Continue to take your prenatal vitamins along with dose of folic acid.
Take a home pregnancy test.
Eat healthy with light exercise.
Educate yourself on the first trimester.