Congratulations! You’ve now nearing the end of the first trimester.

Now you can stop worrying about when you’re going to look pregnant, because great chances are that the time is now! Given that you probably are showing, you may want to head out and upgrade your closet with your first round of maternity wear. 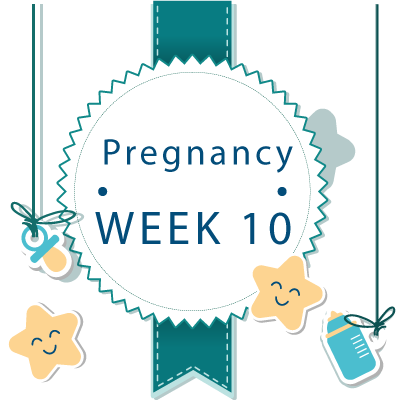 When on the shopping trail, look for clothes that are lose yet comfortable to wear, but don’t go too crazy as your body will continue to change, and you may need a bigger size down the line along with a few essentials.

Your baby when you’re 10 weeks pregnant is about the size of a kumquat, and good news is that it has completed the most important phase of its development.

Considering that these are the final weeks of the first trimester of pregnancy, you’re bound to experience some new symptoms that you may not have witnessed in week 6 or even week 8.

For starters, your breasts are getting bigger, and muscles and ligaments are starting to stretch, mostly due to the fact that your baby is growing rapidly. Apart from that, here are a few more common symptoms in week 10 pregnancy.

Pains and aches around your abdomen in week 10 is common, and are caused due to your growing abdomen trying to accommodate your growing baby.

Some moms may not notice these sensations sometimes referred to as round ligament pain, while others say that it can be excruciating at times. Although this is a common symptom and no reason to worry, it is a good idea to let your doctor know if it gets too intense.

Vomiting and nauseaare not just common symptoms in your first week of pregnancy, but can occur when you’re 10 weeks pregnant as well.

The good news however is that it is likely to subside in the upcoming weeks of your pregnancy.

Your breasts in week 10 are preparing for breastfeeding hence have probably gotten bigger.

It’s common to feel a burnt out—a week 10 pregnancy symptom that is caused due to your body working overtime to support your baby.

One of the key functions of your body throughout your pregnancy is to provide vital nutrients to your baby, which is a process that entails delivering extra blood to your baby hence the blue streaks.

This is mainly caused by the increased blood flow to your vagina along with a boost in estrogen production. This discharge referred to as leucorrhea may seem a bit gross, but believe it or not serves as a natural repellant to bacteria. 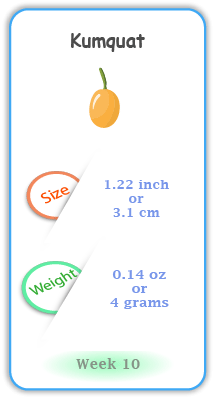 Inside your Belly in Week 10

At 10 weeks pregnant, your belly is just starting to show, and as you might have guessed is due to your baby’s growth at a fast pace.

Some people might still not be able to tell that you’re pregnant, but you will probably need some stretchy pants and lose tops right around this time. Doctors recommend gaining roughly three to five pounds in the first trimester for women who have an average body mass index.

However, if you’re pregnant with twins, you will have to up that number to about a pound per week in weight gain, which equates to 10 pounds by the time you’re 10 weeks pregnant.

There’s no reason to get worked up if you do not gain weight at this rate, which can sometimes be caused by severe morning sickness.

At 10 weeks, you will have several new tests to look forward to, most notably nuchal translucency screening aka NT scan. This scan tests your fetus for risk of Down syndrome and other abnormalities, and is done via a painless ultrasound. 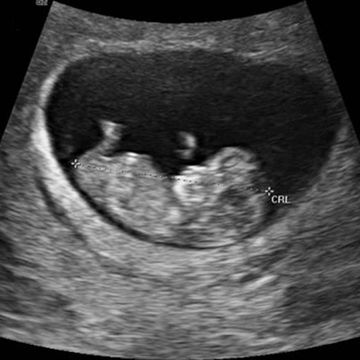 You may also be asked to take a cell-free fetal DNA test referred to as non-invasive prenatal test (NIPT) to test your blood for signs of risk from Patau Syndrome, Edward Syndrome and other chromosomal abnormalities.

There are several other tests that can be administered to diagnose abnormalities such as CVS and amniocentesis, but these are only performed if you’re at an increased risk of having a baby with a chromosomal abnormality.

Your Baby's Development in Week 10

When you’re 10 weeks pregnant, your baby is about the size of a kumquat fruit, and measures roughly 1.22 inches and weighs 0.14 ounces.

At this stage of your pregnancy, all your baby’s cells have been directed to their respective places such as forming of muscles, fingers and toes are getting more defined and brain tissue is growing rapidly. Although your baby does have eyelids, they will be closed shut at least for the next few weeks. 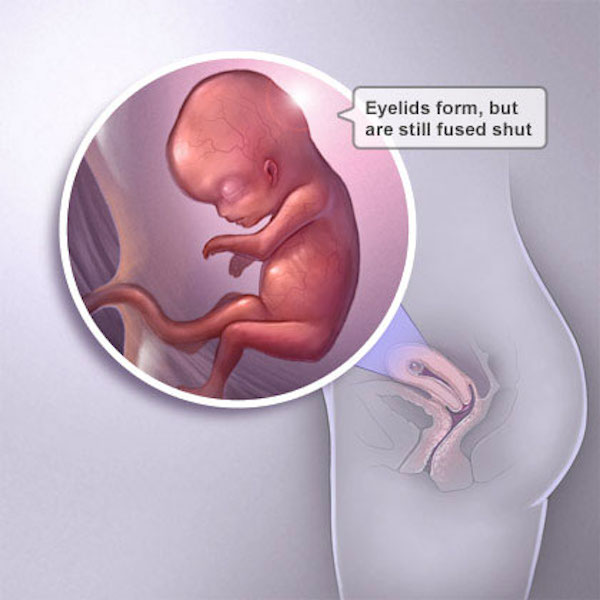 This period of your pregnancy is known as fetal period where the tissues and organs in its body are rapidly growing and maturing.

Your baby can now swallow important fluids such as amniotic fluid, which is its tonic for nourishment.

Further, its vital organs such as brain, liver, kidneys, heart and intestines are beginning to function.

If you could take a peek inside your belly, you will notice that your baby’s hands are curved at its wrists and limbs can bend now. Further, you will clearly be able to see the outline of your baby’s spine, and temporarily bulging forehead owing to its growing brain.